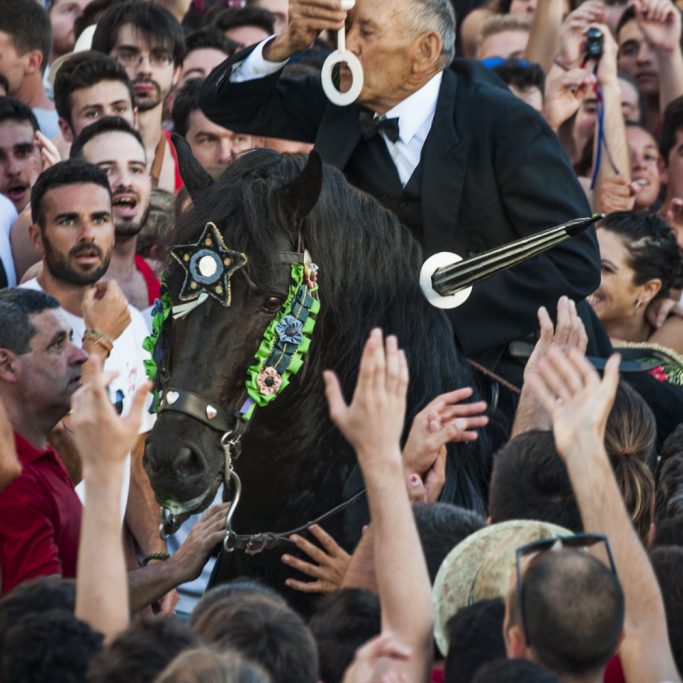 Photographing the Fiestas in Menorca this year was an honor and a privilege. After many years of photographing this event, I was invited by the Caixer Senyor, Gabriel de Salort Sintes, to be his personal photographer.

I have been chasing details of the Fiesta of Saint John (Sant Joan) for many years. Therefore I was elated to get the chance to photograph the sheep man in training.

Returning in time for Es Diumenge des Be (The Day of the Sheep) I photographed the entire event on 18 June. Personally, I clocked 21 kms (13 miles)  of walking that day, in a town the size of a Walmart parking lot. I was invited into many of the palaces and stately homes. Unbelievable!

The entire “Junta” – the main protagonists of the fiesta – walked even more, wearing full suits and heavy boots. They visited 102 homes in the center of Ciutadella that day – a feat that started at 8am and finished at 10.30pm at night. Consider that the sheep man (s’Homo des Be) was walking barefoot, carrying a live sheep, and…. wearing a sheep skin sheath. The maximum temperature clocked 32 C (90 F). All the houses were so happy to receive their visitors! We all complained mercilessly about the heat but we had fun!

​A few days later the actual festival began. Known locally as Festes de Sant Joan, it starts with the “Primer Toc“, the first moment that permission is granted by the Caixer Senyor to the Fabioler (town crier) who visits the palace at precisely 2pm on the day of the 23rd June, to start the festivities.

The town crier is distinctive. He bears a drum decorated with pom poms, plays a flute (fabiol) and rides a donkey. There is no sheep on this day, mainly riders and the magnificent horses of Menorca.

I had a lot of great places to shoot from! Great stuff!  If you want to learn more about photographing the fiestas in Menorca, join me next time!